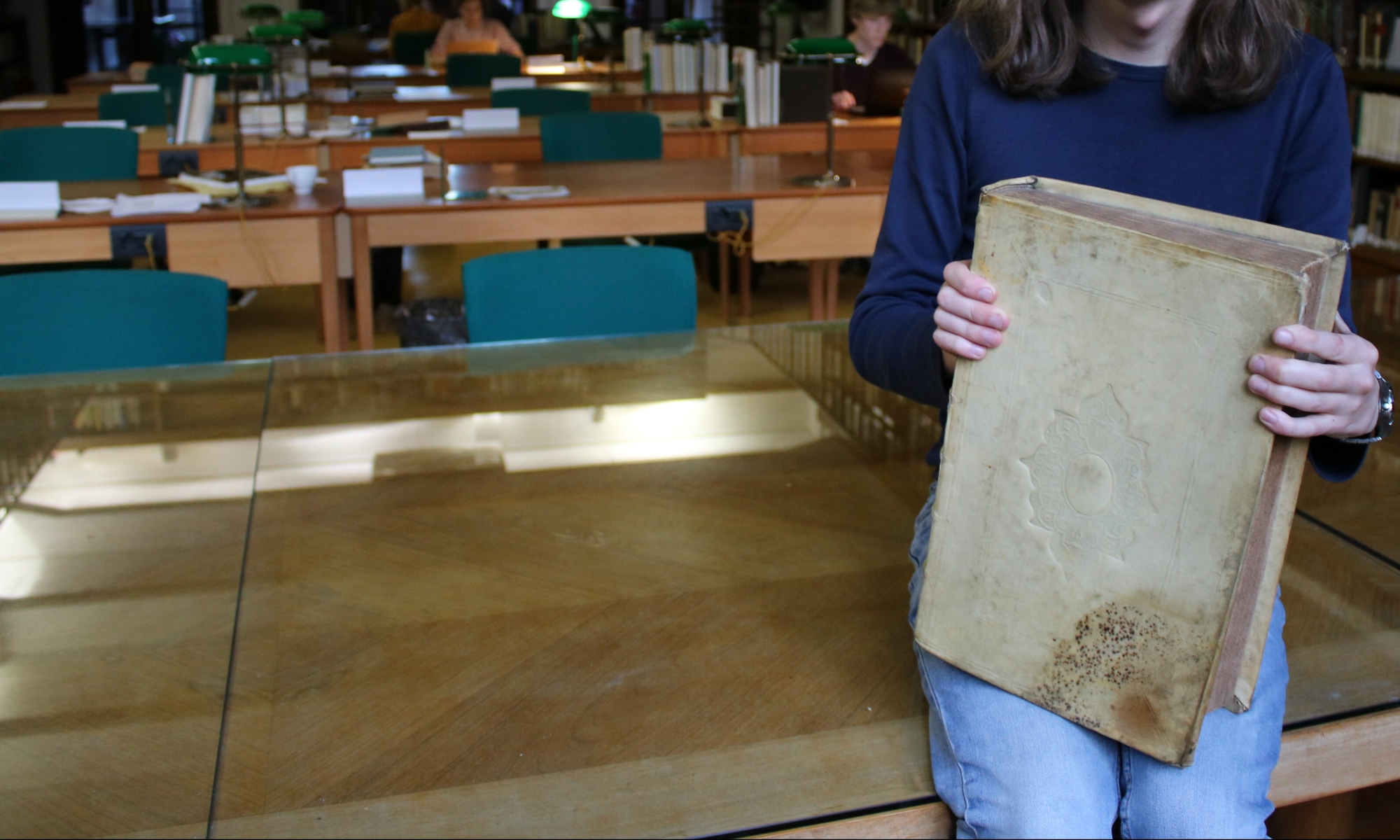 The Renaissance was an exciting time for the classics, especially for the Greek classics. Partially due to an influx of immigrants from Byzantine Greece, many Greek works from antiquity were again brought to light in western Europe. At a fast pace, scholars edited these texts and had them printed in text editions, thanks to the recent invention of the printing press.

One of these editions is the 1586 edition of Dionysius of Halicarnassus (also known as Dionysius Halicarnassius). Dionysius, a Greek historian writing about the mythological history of Rome during the early reign of Augustus, was as obscure then as he is now and the edition of his writings is one in a line of many. The book was printed by Henri Estienne, son of the equally esteemed Parisian printer Robert Estienne, and edited by the German scholar Friedrich Sylburg. In 1691 it was reprinted in Leipzig, and this reprint is now in the special collection of the KNIR.

The differences between this edition and the first edition are rather telling: nothing has been changed, except that the font is simplified. This simplification shows how many Renaissance-scholars, who were rediscovering Greek in the late -15th and 16th century, were struggling how to convert the writing hands of Greek scribes into a usable font.

Before turning to these fonts, perhaps it’s necessary to say a few words about the book itself. A book itself can answer a lot of questions about how these Greek text editions were perceived back then. With a spine of more than 8 centimeters and a length of 38 centimeters, the book makes quite the impression. Sylburg printed a Latin translation alongside the original Greek, in order to accommodate the general reader. Knowledge of Latin was much more widespread than Greek back then.

Unlike a lot of other folio’s of the KNIR, this book does not contain any illustrations. This further consolidates the impression of the book as ‘heavy reading’: this was a book to be used by a serious scholar or a very sophisticated general reader and was to be read at a desk in the study room. It was simply too intellectually demanding, contained too much information and was too much of a niche-interest for it to be profitable to print as a pocketbook. It just wasn’t something that could be read during a stroll in the park.

As has been said, printers in the late 15th and early 16th century were struggling to convert Greek into a usable font. Greek handwriting was very much time- and region bound, and sometimes it even depended on the peculiarities of an individual scribe. It was Aldus Manutius, a Venetian printer, who in 1490 successfully designed a font that is still used nowadays, albeit a gradually simplified and modernized variant.

Unlike his predecessors, Manutius based his font on the writings of contemporary Greek merchants working in Venice and not on the ornate hands of scribes. The writings of these merchants contained many signs known as ligatures; broadly defined, a ligature is a series of two or more letters designed that they are connected in varying degrees with one another. By using these ligatures, scribes could write words that were used frequently more quickly write words that were used frequently, such as particles, and abbreviations. The only remnant of these ligatures in modern-day Greek writing is the iota subscriptum (an example of a Latin ligature would be æ).

The 1586 edition of Dionysius uses the grecs-du-roi font designed by Claude Garamond for Henri’s father Robert Estienne. This font, based on Aldus’ font, would quickly become the norm and is considered the zenith of early-modern Greek type design.  Just like Aldus, Garamond’s font uses a lot of ligatures. A reader of the 1691 edition, however, might be startled: the two editions are virtually the same, both in design and content, except the font of the 1691 edition is simplified and much more readable for a modern reader (fig. 3). 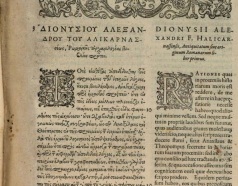 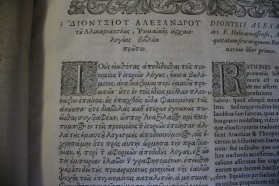 In the context of the time period, this is a logical development. Though ligatures are very easy for handwriting, for a punchcutter they are a nightmare. He had to punch every letter of the alphabet and for every accent or sign he had to punch a different type (consider the variants of the eta alone: η, ἡ, ἠ, ή, ῆ, ή, ἤ, ἢ, ἦ, ἥ, ἣ, ἧ). For every single variant a punchcutter had to punch a new letter. And this doesn’t go up for only the eta: all these variants can be applied to every vowel. If a punchcutter then also had to punch and set every ligature imaginable aside from the simple accents, he’d be up all night long.

This cost-ineffectiveness was amplified by the general reading public of these editions: Western-European scholars weren’t native-speakers of Greek and had to learn these various ligatures by heart. For all groups involved, the use of ligatures had become irrelevant and too expensive.

As was already said, the ligatures in the 1691 edition have been greatly simplified and reduced compared to the original 1586 edition. However, this doesn’t mean that they have completely disappeared. Some ligatures that we nowadays don’t use in Greek typesetting, can still be seen in the 1691 edition. The most frequent ones can be seen here, as of way of illustrating to the reader what these ligatures looked like:

The end of ligatures

All in all we can say that ligatures in Greek writing originated from an environment in which they provided a neat shortcut for the scribe in everyday writing. Because typesetters such as Aldus Manutius based their own typesetting on contemporary writings, they included the ligatures. With Garamond’s font ligatures became the definitive norm from in the 16th century. Over time, however, typesetters and punchcutters discovered that these ligatures were not cost-effective and hindered the reading process rather than enhancing it. Thus, they gradually disappeared over time. This is also the case of the edition of Dionysius: initially it used a lot of ligatures in 1586, but in little more than a century most of them had disappeared, even if the rest of the book stayed virtually the same in all other respects.

Calvin van den Elzen (1997) is a BA student Classics and BA student Ancient History at the VU Amsterdam. He is mainly interested in the way Graeco-Roman historiography interacts between the disciplines of literature and history.

DESCRIPTION: 1691 reprint of two volumes issued in 1586. Bound in vellum, two volumes in one (volume 1: Historika, volume 2: Retorika), both with separate title page. Both contain indices (some Greek, some Latin), notes from the editor and corrigenda. Does not contain illustrations, except for the title pages. In the first volume, the Greek is separated from Latin by columns, in the second one we see an alternation between Greek original and Latin translation. Volume 1 contains introductory epistle to the senate of Frankfurt. First page has ex libris and handwritten signature from former owner, C.C. van Essen.

Reynolds, L.D. Wilson, N.J., Scribes and scholars. A guide to the transmission of Greek and Roman Litarature. Oxford 1968 (4th edition 2013).