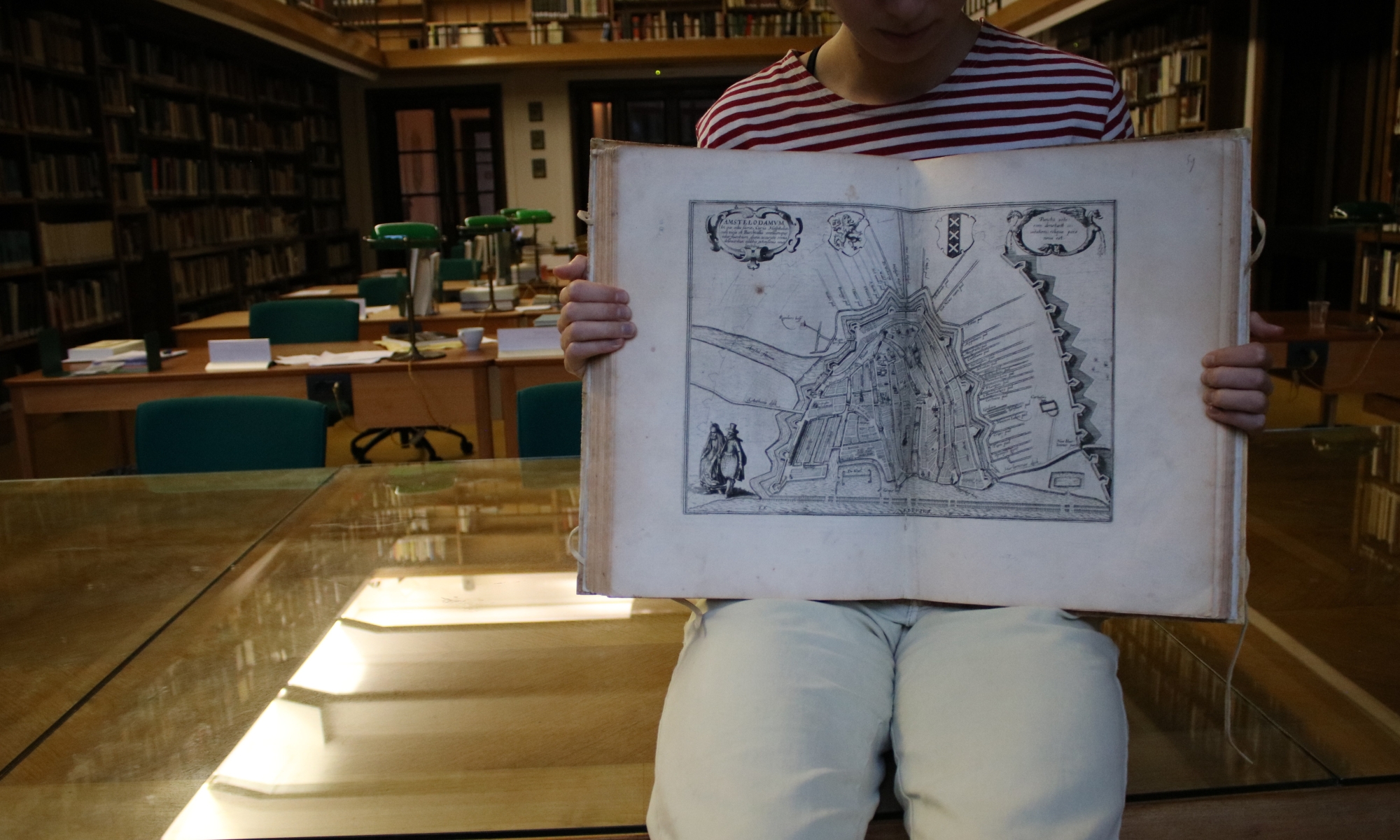 In early modern times, the world was explored by curious travelers and humanists who traveled through Europe and beyond. This hunger for knowledge and broadening one’s horizon went hand in hand with documenting the experience along the way, to inform the people at home and future globetrotters. The demand for descriptions of countries, regions and towns increased especially during the sixteenth and seventeenth century.

At the same time, the cities emerged as centres of social, cultural and economic life. City atlases, besides world atlases, evolved as a popular book genre. A famous example is the Civitates Orbis Terrarum (1572-1617), a large-scale systematic collection of city depictions and maps, made by author Georg Braun (1541-1622) and engraver Frans Hogenberg (1535-1590). Simon Novellanus (Simon van den Neuvel) (?-1597) contributed as an engraver as well. The initiators Braun and Hogenberg were, however, rooted in a long history of map making. How were these page-filling city images, bound together in large, folio-format books, possible? And particularly, what was the impact of technical printmaking on this publication?

The special collections library of the Royal Netherlands Institute in Rome possesses the second volume of this important cartographical work. However, this is not a regular edition of the second volume of the Civitates Orbis Terrarum. It was a self-compiled version of the possessor, making use of different volumes of Braun and Hogenberg. In the latter part of the essay, I will show how the KNIR volume illustrates the influence that the specific materiality of the city atlas could have on its use.

A history of city books

The Civitates did not come out of the blue. It resulted from a long tradition of city descriptions, starting in the fifteenth century. Depictions were, obviously, part of these travel accounts, based on drawings made during the journey or acquired in the cities that the travelers visited. The images were printed with woodblocks, an illustration technique that unfortunately had its limits. Larger city panoramas could not be printed in one press and had to be folded (fig. 1). For this, it was necessary to combine several woodblocks.

City books provided information about global cities known at that time, but these were mostly text-based. The illustrations had an inferior position. Some of the illustrations were even reused as an illustration for more than one city. While the ambition to describe the world increased and the knowledge was expanded, illustration techniques limited the visualization. This shifted when some revolutionary changes were adopted in the printmaking process.

As the copperplate engraving technique spread over Europe, the illustrations became more advanced. Cartography flourished as a profession and book genre, images and maps obtained a more stressed position in the book industry. In city atlases, the proportion between text and image shifted from text to image, because engraving in copper plates made large-sized maps possible. City books became large city map albums in, of course, folio format.

In 1572, the Civitates Orbis Terrarum of Georg Braun and Frans Hogenberg was published for the first time. Braun was the canon of the cathedral of Cologne and Hogenberg was a scholar, printer, publisher and engraver. The latter initiated the project and gathered examples from works of cartographers before him, like the atlases of Ortelius, Schedel and Breydenbach. [hyperlinks] Together with printmaker Simon Novellanus he produced the plates, but not the designing. The new maps were commissioned from other artists like Jacob van Deventer (1500-1575) and Joris Hoefnagel (1542-1600).

The combination of the scale of the prints and the way they were systematically collected, was unique. The visual material was superior to the text and covered all of the paper: the text, printed on the verso-side, rather accompanied the images then that the images accompanied the text. A lot of the editions handed down through the ages were colored by hand, partly by colorist Abraham de Bruyn (1538/40-1587). 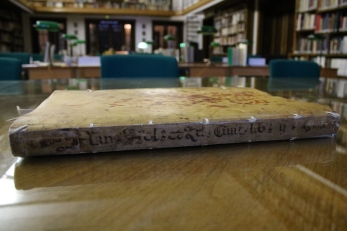 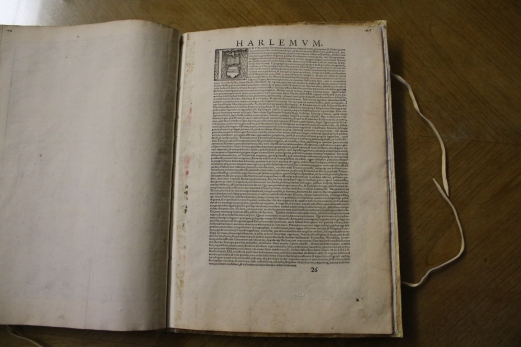 The volume of Civitates Orbis Terrarum in the KNIR library.

As more cities were discovered and the known cities grew, the Civitates expanded to six volumes during the years between 1572 and 1617. In the preface of the German edition, Braun even invited readers to make drawings of their hometown and send it to him so he could add it to the following editions, which were made because of the huge demand for these atlases. Translations soon followed the Latin edition, in German (1574) and in French (1575), to make it accessible for the not schooled people. Also, the maps were reproduced and circulated as individual prints, as they turned out to be very popular.

The volume in the library of KNIR

Although the frontispiece of the volume in the collection of the Royal Dutch Institute in Rome is from the second volume of Civitates, the contents tell a different story. Almost only (bird’s eye viewed) cities that are now part of the Netherlands, Belgium, Germany and (North) France are included. This is contrary to the original ‘liber secundus’ of the Civitates series, which starts with Canterbury and contains non-Western cities like Damascus as well. The writings on the back of the binding confirm this regional focus, mentioning a part of this region, respectively Flanders, Holland and Zeeland. Besides this, two handwritten indices are included (fig. 3 and fig. 4) and the plates in the volume are made on different kinds of paper (according to the watermarks).

It is remarkable that some cities have two versions of maps. Antwerp, for instance, has both a regularly sized map (fig. 5) as a large, folded one, designed by Joris Hoefnagel (fig. 6). The latter, between folios 4 and 5, is not listed in the index. Consulting other editions of the Civitates, it turns out that this ‘outsider’ map is from the fifth volume which appeared around 1598. The same goes for the map of Vlissingen (fig. 7). Furthermore, the smaller sized map of Antwerp was part of the first volume of Civitates Orbis Terrarum (1672). What do these inconsistencies tell us about the use of this volume?

Everything leads to the conclusion that we are looking at a custom-made town atlas, probably composed by the owner (or adapted by later owners) after acquiring the different volumes. It is a self-constructed city atlas: a regional selection of maps and plates, bound together with the original preliminary pages of the ‘liber secundus’. Most of the towns are from this volume, after all. The individual printing with images and descriptions on the same folio, together with the lack of continuity throughout the book, made it easy to unbind the volume and invent a new organization almost like a print album. Could it be that this volume was part of a shelf with more regionally ordered books? As previously mentioned, Braun invited his readers to interactively engage with his book, he called for suggestions for new maps. The possessor of the KNIR volume has shown us his own way of interactively engaging with the volume: by constructing a new one, just how Braun wanted it.

Anne-Rieke van Schaik (1995) has a BA degree in Art History and is currently following the RMa History and Book Studies at the University of Amsterdam. She focuses on early modern books and culture, with a special interest in book illustration and word-image relations.

DESCRIPTION: Bound in vellum. On the back of the book is written: ‘Flan & Hol &et Zel Civit. & lib & ii.’ Engraved title-page. Two handwritten indices (before fol. 1 and on fol. 57). The plates are etchings or engravings, made by engravers Frans Hogenberg and Simon van den Neuvel. The images are mostly bird’s eye viewed maps, but they also include cityscapes or a plates with the weapons of noble Hainaut family. The map of Antwerp is larger (46 x 79) and folded (between fol. 4 and 5). A number is printed below the descriptions, but this number is not the same as the handwritten upper numbering. Leaves are cut afterwards, some numbers are cut off.